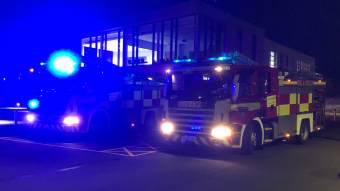 At 1930hrs on Sunday 1 July 2018, Cleveland Fire Brigade were contacted and asked to support the National Resilience efforts and colleagues at Greater Manchester and Lancashire Fire & Rescue Service at the ongoing incident on Saddleworth Moor.

Nine firefighters from Cleveland Fire Brigade and two Fire Appliances are on their way to support the ongoing firefighting efforts.

Cleveland’s Chief Fire Officer Ian Hayton said that “Wildfires present dangerous circumstances for firefighters particularly from changes in weather. We would like to wish the firefighters who are attending this major Incident ‘well’ and will be working with Greater Manchester and Lancashire Fire & Rescue over the next few days to establish any further support through rotating those who have been deployed”.